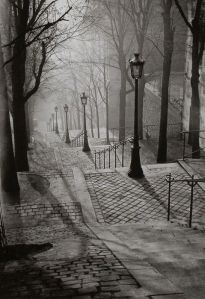 Leaves rolling on the streets, hiding under hasty steps, running on their own beat
Thoughts dissipating in a benumbed light, shivering, absorbing the biting night
Photographs capturing the seconds of a smile, projecting memories in an empty, abandoned cinema
Past gasping for some air before its sudden death, pulling the self, clinging not to fall in an abysm of the no return
Obstacles bringing the rain on the fretful flames, bringing the river to its end
Birds flying to reach a different part of the sun, taking away the stories I’ve devised, unveiling them from an insolent and patient hope
Eyes pretending to be blind in front of the once upon a time, changing the wandering sight into nothingness, and avoiding the forbidden reveries
Pencils breaking, writing endlessly the finishing lines
Forces pushing the let it go on the edge, forgetting where the reality lies
Mornings crawling under the snow, swimming in a mind that doesn’t want to hear the new knocking, waiting to be called inside
Seas like a dry wine, taking the old ideals in an Eden of unhappened worlds
Moments shouting from a closet of minutes that have died, recomposing a delusional feeling, messing with the unrelenting head
Me taking a song by the hand, breathing just to let it be, walking again down to a dancing time that led you in the haze.

About words on a blackboard

In a world of poems, Words steal love and put it on a blackboard

Latest Posts By words on a blackboard